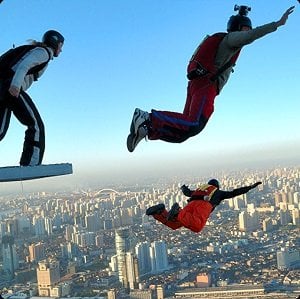 A knife is an essential piece of safety equipment used primarily to cut guidelines, free entanglements, and repair damaged lines. Since the knife is used to cut guidelines, a small sharp knife mounted on the forearm where it is easy to reach is more valuable than a larger knife worn on the leg. If you already use a large knife then it should be worn where it will not easily get tangled. Wearing the knife inside a custom suit pocket designed to hold it is preferable. Alternative sites include the BC hose, tank waist strap, or shoulder. The outside of your leg is the least desirable location for your knife.

Some divers prefer to carry two knives which are mounted so that they can reach one with either hand in the event that the other is occupied. While most divers use either a single 71.2- or 80-cubic-foot tank, cavern divers have used most all types and sizes of tanks successfully. For reasons which will become clear later, it is best that all dive team members use the same size scuba cylinder and that all the cylinders are filled to approximately the same air pressure (but not less than 2000 psig prior to beginning a dive).

By following the above recommendations, air planning for the dive is considerably simplified. Diving cylinders are usually fitted either with a K-valve,which has no reserve, or a J-valve, which maintains a small reserve air supply. However, the amount of air reserve provided by a J-valve is inadequate for safe cavern diving. Instead you should rely on your pressure gauge to make sure that you have sufficient air to safely exit the cavern and to deal with any emergency that may develop. If you are equipped with a J-valve, then the valve should be placed in the activated position, not the reserve position. Some care is necessary to insure that the Jvalve mechanism is secured to avoid creating a potential line trap. Most cavern divers find that duct tape wrapped around the valve is adequate.

The J-valve pull rod should be removed and stowed on shore to avoid another potential line trap.Although not required for cavern diving, many cavern divers consider the dual-valve manifold to be an even better alternative than either a K- or provide two independent air outlets which allow two separate regulators to be attached to the valve. Should one regulator fail, it can be shut off leaving the entire remaining air supply available through the other.