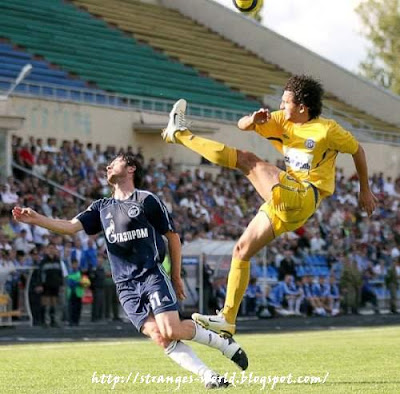 To be able to fly like a bird has always been one of mankind’s archetypal dreams. In 1903, the Wright brothers achieved human flight by inventing the airplane. But human flight without the aid of some form of flying vehicle has never been achieved, up until recently. Today, because of the wingsuit, human flight can be achieved without the aid of an aircraft. While this is not for the faint of heart, it is probably the closest to flying like a bird that exists today. Here we provide the steps you need to take in order to fly like a bird, or at least a flying squirrel. Following theses steps, you will find a discussion about this unusual form of flight.

The first step is to understand what a wingsuit is and how it produces flight. A wingsuit is a jump suit, which creates the airfoil shape because of fabric sewn between the legs and under the arms. It is also called a birdman suit or squirrel suit. When wearing this suit during freefall, with arms and legs spread out, you become a human wing and therefore you are able to glide. Your sink rate is relatively low, and you are able to glide at high speed horizontally. Most wingsuit flights last from 1 to 2 minutes, sometimes longer, depending on how high your jump off point is.

A prerequisite to wingsuit flying is skydiving. You need to be proficient in skydiving prior to wingsuit flying. As a matter of fact, the United States Parachute Association (USPA) recommends that you have at least 200 freefall skydives before even thinking about using a wingsuit. Of course, the more the better. But 200 is the bare minimum. Also, the USPA recommends that the 200 freefalls be within the last 18 months prior to a jump using a wingsuit.

Next, you need to develop an understanding of aerodynamics. Since your own body becomes an airfoil or wing when wingsuit flying, it is imperative that you completely understand aerodynamics and the concept of lift. Being a certified pilot for a fix wing aircraft is not required, but most certainly it does not hurt. The point is, you need to understand how you are able to fly wearing a wingsuit. You should have an understanding of what is taking place aerodynamically when you change the shape and orientation of your body, in order to create the desired amount of lift and drag.

If you desire to have jump off points other then an airplane, this means you most likely will be exiting from some high cliff or man made object. Most wingsuit fliers prefer to exit from a very high cliff. But in order to do this, you will need some mountaineering skills in order to reach the top of the mountain or cliff. Unless of course you are able to afford a helicopter ride, and helicopter rides are offered to your jump off point.

In any case, many wingsuit fliers who jump off a cliff, prefer to climb to their jump off point. So in this case, mountaineering skills are also required. It is not unusual to spend a large part of the day climbing, in order to achieve 1 to 2 minutes of wingsuit flying.

At some point you will also need to purchase a wingsuit. Companies such as Phoenix-Fly and Birdman Inc. offer wingsuits for purchase. Phoenix-Fly is headquartered in Zephyrhills, FL, with authorized dealers throughout the United States and around the world. Birdman Inc. is located in Helsinki, Finland, and they to have authorized dealers around the world.

You need to have good physical and mental health. Of course there are different variations of what one might consider mental healthiness, and some may feel that you need to be a little crazy to do this type of flying. The point here is that you most certainly do not want to black-out, even for a short time, while in flight. In a nutshell, if you black-out, you will not survive. This is the same reason the FAA requires pilots do be in good physical condition. It is important to remember that when you are wingsuit flying, you are more a pilot then a skydiver. So keeping your senses during your short flight is critically important.

Finally, you need a lot of fortitude to confront the danger associated with this type of flying. But is this not true of most extreme sports? So how does wingsuit flying compare to other sports which have a certain element of danger. Here are some statistics from a recent edition of Men’s Journal. Total deaths over the past five years, per 1,000 participants:

In terms of wingsuit flying, we could not find an actual fatality rate, most likely because there is not enough data to work with. Lets face it, not that many people have done wingsuit flying. Fatality rates were very high during the developmental period for this extreme sport. Between 1930 and 1961 71 out of 75 people died trying to perfect a wingsuit. I suspect that the fatality rate today is somewhere between that which you see for skydiving and base jumping.

Now that we have tweaked your interest by examining the steps needed to perform wingsuit flying, lets look at wingsuit flying a little more closely. As we have eluded to, wingsuit flying is simply forming your body into the shape of an airfoil, achieving lift, and flying like a bird, or more like a flying squirrel. Because of the jump suit you are wearing, you become a wing.

You achieve a glide ratio of about 2 to 1. This means for every 2 feet of horizontal movement, you drop about 1 foot. But it also should be noted that with body manipulation, and selection of wingsuit design, you can alter your forward speed and sink rate. To a fix wing pilot like myself, a 2 to 1 glide ratio means you are essentially dropping like a brick. But to a skydiver, you truly are flying. It all depends on your perspective. You are by definition, a pilot, when wingsuit flying. But in this case, your body in combination with your wingsuit, becomes your aircraft.

Lets examine how wingsuit flying works. After you depart from your jump off point, either a cliff, airplane, or man-made object, you will sink but you will also start to fly horizontally. Actually, the technique for departure from an airplane is completely different from that which is used when departing from a fixed object. One requires entry into a slip stream and relative wind, one does not. You will learn this type of information if you receive formal instruction.

After you depart and sink, you will develop a horizontal velocity component. Your average horizontal velocity, relative to the ground, will be around 100mph. But if you have a tailwind, your horizontal speed can reach up to 140mph to 160mph. Your sink rate is much less compared to typical skydiving. Your vertical terminal velocity when skydiving is anywhere between 110 to 140 mph, depending on body orientation. With wingsuit flying, on average you obtain a vertical velocity of around 40mph.

After you have flown horizontally anywhere from 1 to 2 minutes, depending on your starting altitude, you release your parachute, and then land a short time later. Stamina is also important, as it takes quite a bit of muscle strength to fly a wingsuit to its full capacity. The most important part of this type of flying is to know when to release your parachute.

There are groups around the world that are working on wingsuit flying where you do not land with a parachute. In my mind this is a little to dicey. But if flying suit technology and piloting skill improves to the point where you can slow down your flying so that you can land without a chute, then they may have something there. But currently, to perform wingsuit flying, you need to be a proficient skydiver and you need a parachute.

I believe to do this type of flying, you need to be an adrenaline rush junky. In my mind, it is more risky then typical skydiving, and not as risky as base jumping. But most would agree it is an extreme sport, and of course imparts certain obvious risks.

To conclude, if you want to achieve a flying experience which is as close as possible to what a bird feels, or at least a flying squirrel, then wingsuit flying is an extreme sport to consider. It is not for the faint of heart, and the risks are obvious, but for some these risks are worth taking. It is one of the most dangerous sports in the world. But the reward of achieving human flight without the aid of an aircraft can be tremendous. Human flight has always been one of mankind’s archetypal dreams. With wingsuit flying, you can experience what only Leonardo da Vinci could only dream of, the dream of flight.