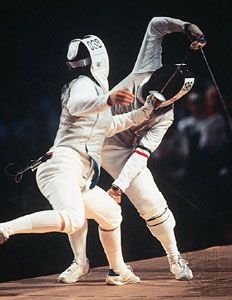 We were flying in a twin engine Islander aircraft hoping to skydive from 12,000ft, at about 4,500ft we noticed that we were no longer climbing although we were still heading away from the drop zone; I looked back in the direction of the drop zone and could see some huge black clouds rapidly building.

It was not looking that good and we thought we might get a call for a low climb out.

I checked my altimeter and the aircraft was now down to 4,000 ft I spoke to my friend Dave and said I can?t see what the problem is, almost immediately the left hand engine shut down and the pilot shouted get out. This was a real aircraft emergency so you don?t hang around you just get out of the aircraft as quickly as possible.

The door was opened in a couple of seconds followed by people leaving the aircraft in a real hurry as Dave and I went for the door one of the jumpers was blocking the isle calling to the pilot ?what?s wrong? the pilot did not answer he just glared angrily and shook his finger pointing to the lame engine.

We almost had to push this guy out of the aircraft; I just could not believe that someone would question an experienced pilots command to leave the aircraft.

Dave and I exited last we took a 2 way straight out of the door, with all the excitement of a real aircraft emergency we had no time to look where we were in relation to the drop zone.

When we deployed our parachutes we could see that we had no chance of making it back to the drop zone. I had a quick look around and could see one of the jumpers flying in the opposite direction, I began to question myself as there are two airfields and they both look very similar. I soon realised that he was flying in the wrong direction.

I still could not see any wind socks because of the distance we were away from the drop zone. Suddenly my mind seemed to be playing tricks with me and I began to question the direction for landing, I had checked it earlier in the day but with no wind sock I began to doubt myself.

I tried spitting but it did not give me a clue so I looked around for any signs of smoke, no fires no chimney smoke.

I was pretty sure I was heading into wind and I had time and enough altitude to make one final check I went into fairly deep brakes and made some gentle turns, the ground speed went up straight away which confirmed that my original heading was correct.

We all made a safe landing in some fields, and the pilot managed to fly the aircraft safely back to the drop zone. One of the other jumpers came up to me and said I was following you because I could not see which direction to land in, I laughed and told him that I doubted my own judgement as well.

With the use of GPS we have become used to getting a good spot over the drop zone, sometimes we perhaps become a bit complacent in expecting to be over the right spot every time.

There are always lessons to be learned to ensure the best chances of reducing injury or worse, so what could we have done to have made this incident safer?

We could not predict this engine failure however we could have made thing safer by just following some simple rules.

On this occasion we should have paid more attention to the weather conditions in particular to the wind direction. When you can see a wind sock it is easy to judge the direction for landing however with no reference to wind direction things can become more difficult.

I have a little check that I make on sunny days, I check the position of the sun against the wind direction and providing the sun is not directly overhead you can use it in most situations to get an into wind landing even with a bad spot.